I can write you a story, teach you French, sing you a song.

A few weeks ago, Andrew and I came up with another movie project idea. Why not put together a list of movies that have been remade and their originals, and compare the two?

At the top of the list was a movie from the 70s that was redone earlier this decade and is known for many things, namely that it was the last movie Whitney Houston did before she passed away. I didn’t know that Sparkle was a remake until I looked more into it, and, curious, I added the original and remake to our list.

So how do both movies compare? And which one did we like better? 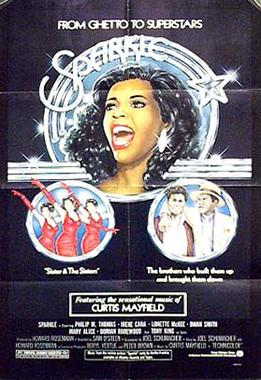 First, we watched the original Sparkle, which came out in 1976, starring Irene Cara, who would go on to sing the title songs for both Flashdance and Fame in the early 80s, and Philip Michael Thomas, better known as Tubbs from Miami Vice. She plays the title character, the youngest, as mentioned above, in a family of three sisters. She’s not the most gregarious character. That honor goes to the lead singer of the family band, Sparkle’s older sister Sister (seriously? You guys couldn’t have come up with a better name?). The girls live in Harlem in the 50s and it is suggested to them, by Stix, a.k.a. Philip Michael Thomas, Sparkle’s boyfriend, that they should form a girl group. He offers to be the manager.

OK, sounds like your typical music movie so far. And that’s what it turns into. The rest of the movie shows the girls gigging around town, working their way up, but then breaking up with Sister gets involved with a guy named Satin, who gets her hooked on drugs and beats her. She dies, so the group breaks up, and Sparkle attempts to, well, sparkle on her own as a solo artist. And we end the movie with Sparkle’s first performance as a solo artist.

While the movie was well-shot and had that gritty look it was obviously going for, I didn’t care one iota for any of the characters. They were all so one-dimensional that it was hard for me to be drawn into the story. I didn’t care what happened to any of them. The girls were all led around by the men, never making decisions on their own and actually growing as people. And the men were all bad, sleazy characters with nothing else to them other than “drug dealer” or “shady guy trying to exploit the young girls’ sexuality.”

That and I could see where the plot was going from a mile away.

Perhaps the most uninteresting character of all was Sparkle herself, which I found rather disappointing.

Sparkle’s name is the title of this movie. So you’d think she’d be the most interesting character. Far from it. Sparkle in the original movie is a very flat and not interesting character. She’s led around by everyone else. Everything that happens (there are other subplots involving Stix’s drug shenanigans) is because of someone else doing things for Sparkle. She doesn’t seem to do much for the movie itself except stand around.

“Oh my boyfriend wants my sisters and me to form a band and get famous. Guess I”ll join them, sure, I have nothing else to do.”

“My sisters want to sing this song but I don’t really want to. But I’m going with it because I have nothing else to do.”

“My sister is obviously being beaten up. Oh well. I won’t do anything about it.”

“My boyfriend wants me to sing this song. I don’t really want to. But I’ll do it.”

While I appreciated its cautionary tone (here’s what happens when you try and get famous: you’ll get hooked on drugs and be involved in all sorts of bad things), I just didn’t like the movie as a whole. Meh, whatever.

On to the remake: 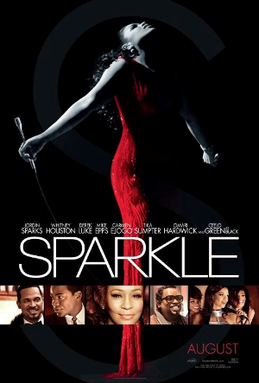 We come to the remake, done almost forty years after the original version. And the basic plot is still the same. A rags-to-riches tale of an aspiring girl group who runs into trouble on their way to the top, they break up, and the title character breaks out on her own. Woo. There are still drugs and abuse, but…. somehow it feels different.

There’s something lighter in the tone. Maybe it’s the music in all its catchy late-60s glory. Or all the camera angles that don’t feel so dark and sinister, like in the original. You get more of a sense of “wow, wouldn’t it be great to be famous” rather than “No, you don’t want to be famous because look what can happen to you.” Also, it should be noted that instead of Harlem in the 50s, we get 60s Detroit. OK, I get it. Motown. You guys are playing off of that. Fair enough.

More than that, the sisters are very different. As in, way more modern. They know what they want and they go for it. They aren’t letting people just make decisions for them. Yes, Sister still takes abuse, but in this version, the abuser is stood up to.

Sparkle is also a far more interesting character in this version. In a major difference from the original, this movie makes her into a singer/songwriter. The movie opens on a night when Sparkle and her sisters, including Sister (they STILL couldn’t have given the older sister an actual name?) are performing a self-penned song at a local open mic-type event. It later comes out that she wants to be famous and write songs for people, which is why she writes all the songs that they perform. Way to go! Seriously! You’ve actually, you know, given her something to do. She has a much more take-charge attitude, as does Sister, and the girls all go for what they want.

Unfortunately, their mother, played by Whitney Houston, does NOT approve of her daughters seeking fame and fortune as performers. A big difference from the original, where the mother did approve of her daughters’ budding music careers. In this version, their mother Emma was once a famous singer (one has to wonder if this was put in the script on purpose as a nod to Whitney’s own career as a famous pop star) and she has cautioned the girls from a young age to not go into show business. As she says at one point, “Wasn’t my life enough of a cautionary tale for you?” Truer words were never spoken.

Since the mom doesn’t approve of the girls singing, the three of them sneak out and sing their songs at various events around town. And they become famous, getting involved in all sorts of scandals and even Sister marries Satin, who this time around is still a druggie and abuser, but he is killed by one of the other sisters in self-defense when the sisters come to Sister and Satin’s house to help her pack her things so Sister can leave him. Sister takes the fall and goes to jail, so the group breaks up. Another big difference from the original. Sister doesn’t die in this version.

We still get Sparkle trying to make it on her own, but it’s more on her terms. She is desperate to be signed, so she stands around everyday waiting for the head of the record label to see her, and when he does see her, she lays out exactly what she wants. You go! Also, she is writing the songs, which suspiciously don’t sound very much like late 60s music at all, but I digress. At least Sparkle actually does things in this version. Also we get to know the mom more in this version too, since she’s played by Whitney Houston. And we also get to see Whitney Houston sing, since, well, Whitney is in a movie and she’s known for her voice, so let’s have her show that off. She serenades us with a rousing if raspy (she was known in her later years for chain-smoking…..*sigh*) rendition of “His Eye is On The Sparrow.” I was never a big fan of Whitney’s music, because it’s just not my thing musically, but man, watching that scene of her singing just made me sad. Cautionary tale indeed.

While the basic story was the same, enough was changed in this version that it stands on its own. In fact, between the two, I much preferred the remake. I know Andrew did too. We both liked how they developed Sparkle’s character, though the music was not quite our thing musically. The characters were better developed, the editing and overall movie work was much better, and the story was just far more enjoyable than the original.

Still not a new favorite of either of us, but certainly worth a look.

And the remake all the way!